While the dirty floor on the right side of the Black Box Theatre doesn’t seem like the best seat in the house for the traditional, season-ending Directing Scenes, it does hold its advantages. For example, when a distraught wife dramatically throws her wedding ring at her husband, it has the potential of landing in your lap.

And then, when a heated argument breaks out and one guy is shoved by another, the first guy may not catch himself in time and fall right on top of you.

Admittedly, neither of these happened to us (though the first did happen), but they COULD have. And that’s why we encourage everyone to spend at least one evening of their Georgia College career on the floor of the Black Box Theatre with their legs contorted to stay within the green lines.

Even beyond the dangerous “could-haves” and the numbing cramps of our legs, the five 20-minute scenes entertained us and the rest of the audience with stories of depression, loss, rape, murder and, of course, love.

Directing Scenes consisted of 10 20-minute scenes, independently directed by the students of this semester’s directing II class. Each of Thursday and Friday’s shows had a unique twist, a director-made change to the original scene.

While we missed the scenes from Thursday night, Friday night held plenty of talent and entertainment to make up for it.

“Next to Normal,” directed by Kayla Carson, while verging on the self-absorbed, melodramatic side of theater, kept us engaged as it flipped-flopped between two seemingly separate stories. The first story was of two kids falling in love. The girl goes off the deep end, only to be brought back by the boy’s love. The second story followed a married couple as the woman refuses to let go of her dead son.

In both stories, the women are in some way damaged, and they need the men to bring them back. Not very inventive. The best part of the scene was at the end when the audience realizes that the younger couple and the married couple are one in the same. The meeting of the two stories was seamless, utilizing the aforementioned ring.

One of the most original and imaginative scenes was Ryan Page’s “Really Really.” In the midst of Sexual Assault Awareness month, Page chose to depict the life of a supposed rapist directly after the act. The twist? The rapist was a woman, and the victim, a man. This obviously surprised us. The highlight of the entire show was Drew Allen’s portrayal of the distraught victim and his passionate finale scene. Certainly left the audience with some hard questions to think about.

Our favorite by far was “Gruesome Playground Injuries,” directed by Justin Kalin. The scene documented the lives of a two friends (who you want desperately to get together, but can never seem to be in the right place at the right time) in four different stages of life. This one even had our favorite line of the night: “Girl Scouts, what a bunch of little bitches.” The comic relief came in just the right parts, never letting the audience slip too deep. And the chemistry between Will Morris and Allison Esposito (who play the couple in the two later stages of life) made us feel like intruders on a real relationship.

The fourth scene of the night, “Bash,” was directed by Allison Peasley. We particularly enjoyed this one (though we may be slightly biased since our very own sport’s editor, Nick Landon, played Tim). The original show featured just two actors sitting on the stage, telling the story of their trip to New York. Peasley’s version included an ensemble acting out the events as the main couple retold the story. The in-your-face, senseless violence against a homosexual man juxtaposed against the frivolity of a party was raw and powerful.

Maria Barber’s rendition of “Into the Woods” closed out Friday night’s performances. This placed Prince Charming, Jack, Cinderella and Rapunzel back in high school. Back to the days of mother-daughter drama and unrequited teenage love. While the scene overall was pretty average, the actors’ singing, especially the male characters, were crisp and solid. This execution saved the scene from the terrible death of forgotten lines and mediocrity. 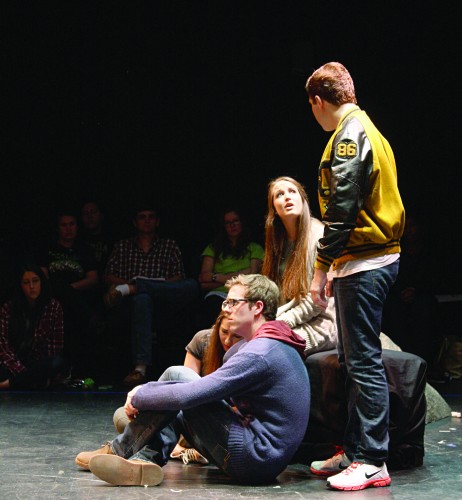 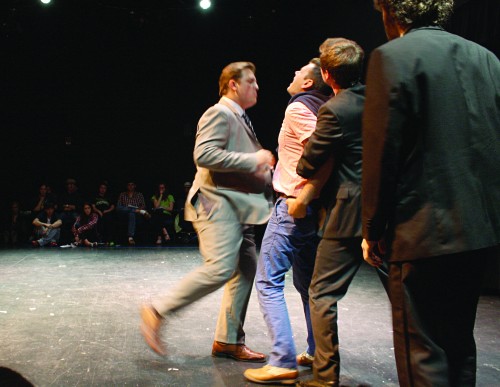 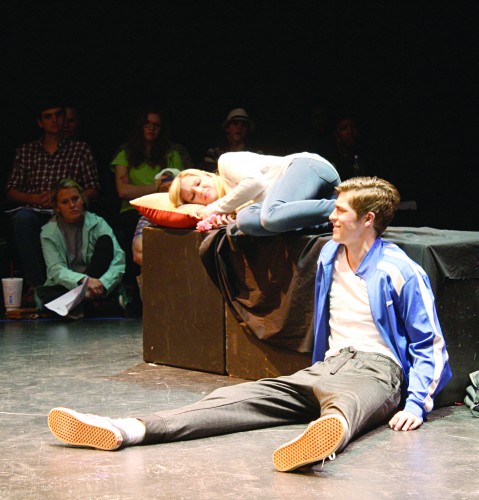 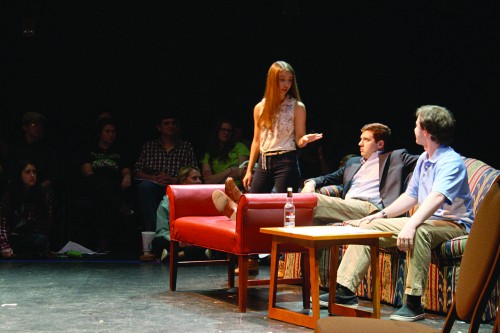 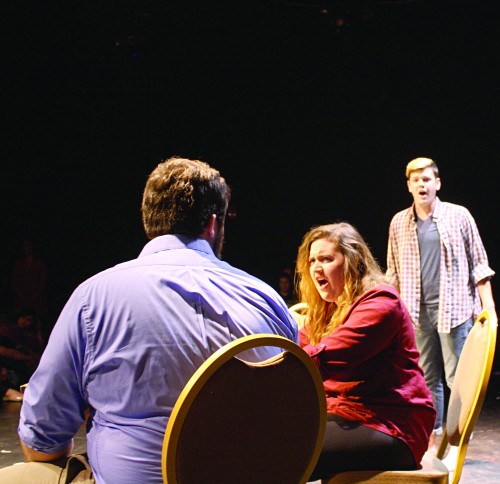 Be the first to comment on “Students reimagine Directing Scenes”