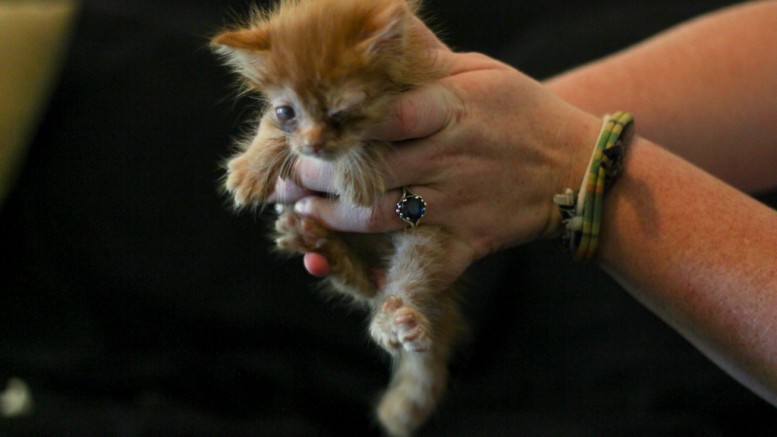 Weighing in at a whopping .67 pounds and $1,512 on www.gofundme.com, Noah might be the tiniest, richest bobkitten at Georgia College.

Risse said her friends couldn’t keep him, and so her roommate convinced her to take it in.

She also said she doesn’t care much for her roommate’s cat, and that she was not on board for taking the kitten in.

“I’m usually so against college students having pets,” she said. “It’s just such a big responsibility.”

But, she fell in love with the kitten, and that’s all she wrote.

Noah’s eyes were infected, swollen and oozing. So Risse took him to an urgent care center, where she was told his eyes may need to be removed. This was later confirmed by a veterinarian.

Risse said the veterinarian told her the cat is almost certainly blind from the severity of the infection, but it won’t pose a problem in the cat’s day-to-day life, as cat’s senses are typically extraordinarily sharp.

The kitten would, however require a serious surgery, something to the tune of $1,200, to make sure that he didn’t grow deathly ill from his infection. Determined to keep Noah, and to make sure he stayed healthy, Risse took to the internet.

The “Baby Noah’s Health Fund” gofundme page asked for $1,200, but raised just over $1,500 in 24 hours. Risse said she only shared the link to her gofundme on her tumblr account once, and her roommate shared it on Bobcat Exchange after the majority of donations had been made.

The highest donation made to her page was $250, and it was, like many other donations, anonymous. Noah will get his operation sometime within the next couple of months, as he’ll need to mature more to have the surgery performed safely.

Be the first to comment on “Noah, the crowdfunded cat raises $1,500 surgery”