Nicole Krinsky @gcsunade Located about three blocks north from campus on North Wayne Street, it is hard to miss the vibrant mural that covers the side of the Milledgeville Habitat for Humanity center.

Today from 5 to 7 p.m., the Mural Art and Communities class at Georgia College will unveil their mural restoration project for Habitat for Humanity Milledgeville to the community.

Taught by Professor Valerie Aranda, the purpose of the class is to teach community-based projects and collaborations through the creation of murals as a specific medium of art that involves community engagement.

The semester-long beautification project involved restoring a mural originally painted by Aranda’s class of 2004 as a part of a collaborative effort with Martin Moreno, a visiting artist from Phoenix, Arizona.

Approximately 20 feet tall, the mural depicts a diverse range of images that symbolize everything from community members participating in the building process of a home, to handing over the keys to the new homeowners. The borders of the mural are lined with images of different tools used for building, but everything is centered upon a fiery sun.

“With the sun, we had talked about representing the four cardinal directions,” Aranda said. “It could also reflect different races of people regionally like a compass.”

Because the mural is outdoors, the class suffered several setbacks throughout the semester, specifically due to the constant rain. However, that did not deter senior studio art major Brooke Adams from taking advantage of the opportunity to paint large-scale.

“I always do really little, tedious work so I think that’s why I wanted to go so big,” Adams said . “I got to explore what my stroke is on such a large scale because I don’t usually have those opportunities.”

Adams also said that one of the biggest challenges was matching the strokes of the people who originally painted the mural back in 2004. She explained that every artist has their own stroke-style when painting, and it is important to match one’s individual style to the person who painted before them in order to keep the cohesion of the mural in tact.

The community’s response to the restoration of the mural has been nothing but positive. Each day that the class has worked on the mural, they have had at least one community member praise them for their hard work and talent.

In fact, during the Colonnade’s onsite interview with the class, two local veterans who live in the surrounding community walked up to compliment the class and express their gratitude for the mural in the community.

“We had one lady who was driving a school bus, and she was just about to go get the kids from her school, and she stopped and got out to talk to us,” said senior mass communication major Kristin Lukich. “A lot of people are really happy we are redoing it [the mural] and are happy that it is very inclusive of all the diversity in Milledgeville.” 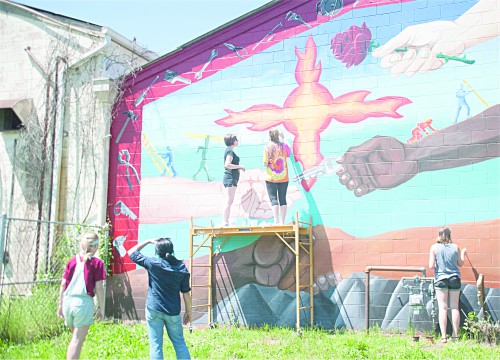 Be the first to comment on “Habitat mural revived”