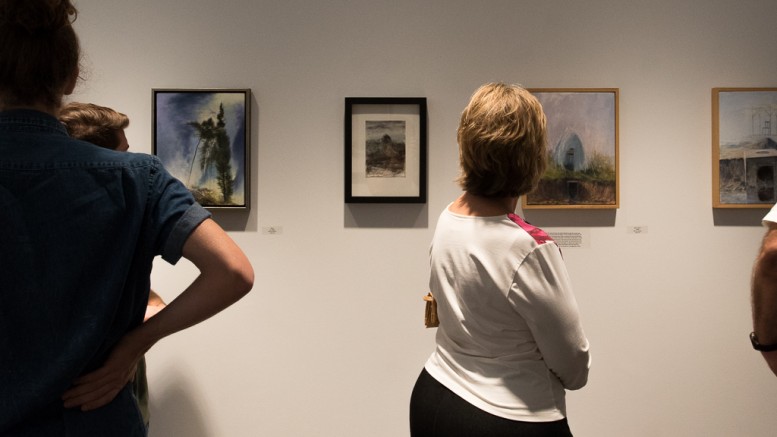 An entire summer’s worth of work was brought to light in Ennis Hall for an art gallery dedicated to Georgia College’s own Dean of the College of Arts and Sciences Ken Procter’s work, which opened Aug. 27.

Thanks to six talented curators, a gallery coordinator and a gallery technician, Procter’s work was beautifully displayed in the format of a “journey” which spanned 30 years’ worth of art.

The centerpiece of the exhibit was a staggering painting of a green, Lord of the Rings-esque mountain and valley.

While walking through the exhibit, the viewer can witness Procter’s own transformation that begins with a simple 1983 charcoal drawing and ends with a tranquil portrait of a tree in a green field.

According to senior art major Mairi Dabbs, the process begins with the analysis of different moments in his work, and it ends with them writing extended labels on the specific works they chose to emphasize.”

In between those two steps, the students must choose which pieces to showcase and decide the best way to present the pieces.

The student curators were responsible for deciding on a theme and making sure the lighting was correct.

While wandering around the room, the viewer was able to learn about the inspiration behind Procter’s landscape scenes thanks to his brief introduction.

Each piece of art was also paired with beautifully written descriptions beside the display, aiding the viewer with their understanding of the work. These statements explain the metaphorical value of various pieces and the inspiration behind them.

Senior art major Catherine Allen’s favorite piece is called “The White Bird,” and she describes it as “impossible to replicate”.

“Each piece tells a different story a part of Dean Procter’s life, and the viewer can experience each shift in tone and style first hand,” said senior history major Mackenzie Truitt.

Proctor described his desire to paint landscape as a phenomena that “welled up from within.”

“Dean Procter’s pieces are unique because of the amount of thought put into them,” Allen said. “He’s very inspired by Eastern philosophy and culture.” Other pieces, however, are more austere and grim, but most pieces are bright and joyous because, as Dean Procter concluded, “Every morning, the sun rises.”

Be the first to comment on “Grasping the Earth’s natural essence: Dean Ken Proctor’s ‘Journey’”