Students come out for the first blood drive

Students, community members and faculty lined up inside the Magnolia Ballroom, eagerly waiting to donate at the Red Cross blood drive hosted by Georgia College.

Organizers and Red Cross employees filled the ballroom with chairs, medical equipment and snacks for the donors and workers. Organizers expected more than 100 donors during the two-day blood drive.

“It just feels good to give back,” said sophomore biology major Sasha Tejada. Tejada added that she donates blood frequently because she enjoys serving her community and helping out in any way she can.

Donors interested in double red-blood cell must be blood type A negative, B negative or O. They are also required to meet stricter height, weight and hemoglobin requirements.

Double red-blood cell donation takes longer than donating whole blood. It requires the use of a special machine that separates red blood cells from platelets and plasma, preparing the red blood cells for donation and returning the other components of the blood back to the donor.

“I feel like every now and then it’s good to just do a round of doubles,” said Brandon Hindman, a junior psychology major. Hindman is one of the few donors who meets the Red Cross’s strict requirements for donating double red-blood cells.

Kelsey Gower, accounting sophomore major, was among the volunteers helping donors sign in. She has become a frequent donor, donating at every chance she gets since she worked up the courage to donate for the first time last spring.

“I’m aiming to get that gallon pin,” Gower said. Tuesday’s event was her fourth time donating blood, halfway to the eight donations required to receive the pin awarded to donors after giving at least a gallon of blood.

Goals set by the Red Cross for GC were just shy of being met for this drive. The Red Cross hopes to increase the number of donors for the next school wide blood drive. 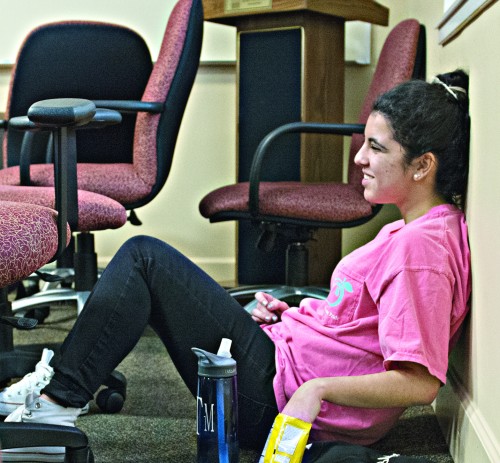 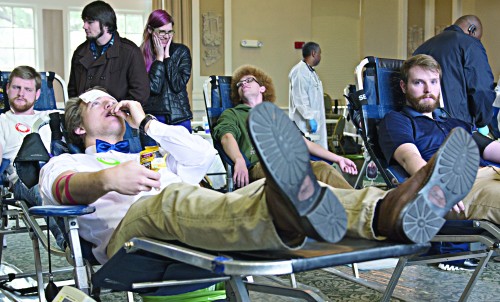 Be the first to comment on “Giving the Gallon”