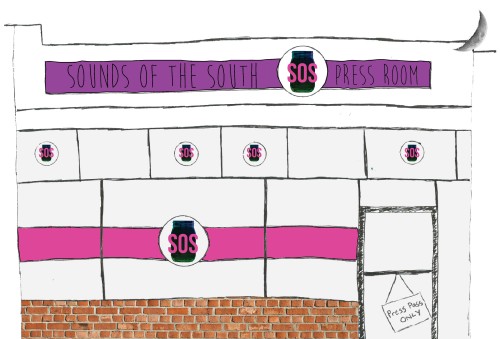 Someone let Colonnade reporters Nick Landon and Sam Jones into the Sounds of the South press room and artist lounge. Hilarity ensues.

colonnade: If your band was a cut of meat, what would it be? the norm: Flank steak, 100 percent. stellar shores: Filet, because filets are pretty expensive and if you’re eating them you’re kind of living the high life. lingo: Bologna? Wait no, what’s it called…uhh…Olive loaf? First of all, we nasty. Second of all, there’s a lot of stuff going on. -I think I’d go with an outer layer of cured pure prosciutto. family and friends: Tofu -That doesn’t count. Tuna (Tuna Fortuna, bass player), take it away. -…[whispers] It’d be Tuna.

colonnade: If your band could take a complete left turn in sound what would you guys play? family and friends: Screamo spoken word tween bop. lingo: Just straight funk. Like, crack funk. alex guthrie band: Go to more like 60’s soul, Marvin Gaye, Otis Redding type stuff. family and friends: Just any way we can be in the next Disney Movie. -Brink 2 anybody? the norm: Trap music…Or maybe children’s.

colonnade: If you had to pick a type of venue to play in, what would it be? stellar shores: If I had to pick one, the more people the better. But, the show really just depends on the connection you make you with people. I’ve had a show where there’s just like four people there but you’re all having a great time. You could care less about having a bunch of people when you have a great room. alex guthrie band: We like Eddie’s Attic. Small environment but really cool and intimate. lingo: I would have to say arena. family and friends: The smaller shows, there is something to be said about the connection there that you just don’t get sometimes with a bigger room. I feel like a smaller room that’s packed out with people who want to be here is just a great experience. the norm: There’s something about sweating on people in a little club.

colonnade: If you had to do something besides music, what would it be? I would probably just find more things to hit with sticks. – Dan Rubin, The Norm’s drummer

colonnade: Where do you want to be in one year? family and friends: Red Rocks. alex guthrie band: Touring. -We really hope to be on the road, opening up for a band like an Allen Stone or an Alabama Shakes. -TGI Fridays lingo: Still just playing. I think as we get a little older we’re juggling things, so if we can juggle those and still play music then I think we’ll be doing good. -We definitely have to be a mariachi band in a Mexican restaurant for a year and a half before we make our next step. the norm: Playing more festivals. stellar shores: I want to have released a lot more original music. -Applebee’s Basement Party

colonnade: What are you working on right now? family and friends: Some new songs that will hopefully be on the next release and just winding up this upcoming release and trying to fix things up for that. lingo: Just staying alive. stellar shores: Lots of original music. the norm: Moving. alex guthrie band: I’m actually, well I mean, I just bought a van and I’ll be living out of that (‘BY THE RIVER!’) and I’ll be writing my next album.

colonnade: Goal for SOS? family and friends: Bring the silly to Milly. lingo: Rock. We want another crazy Milledgeville experience. -I would say 100 high knees and 50 lunges.

colonnade: Major influences? family and friends: The Oh Hellos from Texas are big for us, Typhoon, The Head and The Heart, Lord Huron. -….. -Hoobastank -Smash Mouth -Creed -Limp Bizkit -All we listen to on the road is Limp Bizkit.

colonnade: These days there are a ton of major music festivals all over the country. Why are the smaller ones like Sounds of the South still important? family and friends: I think that the smaller festivals are really important because it’s a better community. Everyone’s excited for each other and stoked to help people grow. Everyone has the community’s best interest at heart. That’s not to say bigger festivals don’t, but I always feel a lot more at home at smaller shows.” lingo: Before the bands can go play the Coachellas and Bonnaroo they have to play here. It’s also cheaper for fans and a lot of times the music is just as good. alex guthrie band: They’re personal. The bigger ones are more of a monetary and time investment. I think that grassroots festivals are extremely important especially for access. -It’s the people that helped us get our start. We have roots in all these communities that keep inviting us back time and time again. It’s like a reunion honestly. stellar shores: Because they’re an awesome launching point for artists before they get more known. They’re like little sign posts for people to keep going. Festivals like this, to be included in it makes you feel like, “Yes. People care. Let’s keep going.” the norm: I feel like festivals like this are more intimate. The crowd feels like they’re part of the band…I mean these big shows are awesome, there’s great lighting, but these [smaller shows] are uncut. family and friends: It’s a good chance to go to Wal-Mart and browse the intimates section.

colonnade: What’s the next move for y’all as a band? family and friends: We’re about to release our next EP and we just want to get out on the road and start playing more shows and meeting more people. -I think the obvious end game is the Ellen DeGeneres Show.

More from the press room: family and friends: (JP McKenzie) He said, “Take your man bun out. You’re a disgrace to man buns.” He wasn’t wrong but I didn’t understand why he was mad. alex guthrie band: I played screamo until I found Ray Lamontagne. lingo: The people at this bar did not like us. The owner cut us a deal and said he would pay us half and then we could leave and they would just put on karaoke. We played half the show, and as we’re moving out, they’re bringing the karaoke equipment on stage. alex guthrie band: People are generally pretty kind and pretty awesome in music. stellar shores: I started DJ’ing by accident, I just got tired of waiting for drummers to show up to practice. -(Andrew, drummer) Shut your mouth bass player. Andrew, Drummer family and friends: (Tuna Fortuna) “The Color Purple” is probably my favorite zombie apocalypse movie. the norm: (Dan Rubin): I have a question. Is it pronounced Brian Rucker or Brian Roooker? -(Brian Rucker): I’ll answer that with the same answer I give to anyone who asks me that question…How dare you speak to me? Nick Landon (after being bestowed with a man bun by Ryan Houchens of Family and Friends): I feel different. I wasn’t a man a minute and a half ago, and now, I am one. Thanks to Family and Friends.