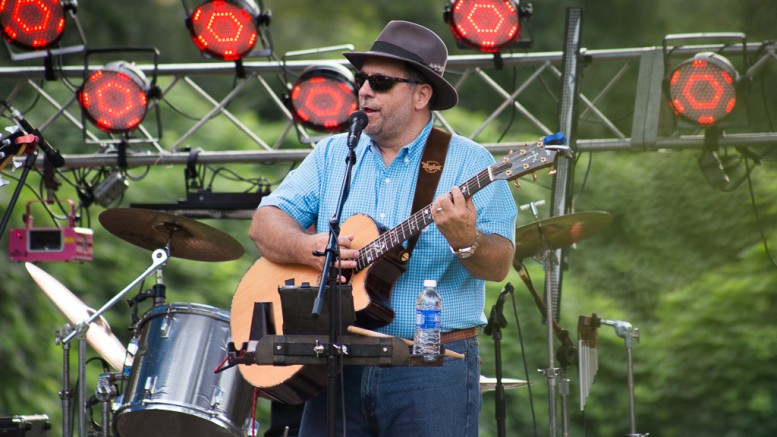 On a gloomy, rainy Saturday morning at Milledgeville’s Greenway, Frisbees were flying, dogs were running and nearly 35 kayaks were being loaded in the water for the third annual River Rat Race. It was River Day for all Milledgevillians.

River Day is an event put on to advocate environmental awareness and to raise funds for children’s charities.

Tents lined the sidewalks with various organization members ready to pass out brochures, advertise their petitions and perform science experiments for kids, all while that night’s concert stage was being set up in a nearby field.

“This is the third year of the River Rat Race and the second year that we have been working with some of the campus organizations like the Chemistry Club and the Environmental Science Club, and we’ve really turned it into an event that’s not just about fun but also about learning about the river,” said Matt Roessing, the head organizer behind this event.

As for the charities, Joel Burns from the Kiwanis Club said they raise money for the Boys and Girls Club, Boys Scouts and the maternal neonatal tetanus.

“We have raised nearly $110 million towards research on MNT, that a child receives through the mother from groundwater contaminated with tetanus,” Burns said.

The Environmental Science and Chemistry clubs put on experiments and displayed research projects as a way to teach people about the environment.

Senior co-presidents of the Chemistry Club, Jennifer and Jessica Minnick, brought common household items and swamp water from South Georgia to demonstrate the difference in pH levels in waters from various areas around the state.

“We set up the pH scale so that people could pick out what was acidic versus what was basic and where the neutral range is,” Minnick said.

“We have about a dozen recycling bins set up around that we will take after River Day and the concert series is finished,” Whitehouse said. “We also have a petition on campus called Seize the Grid, which is basically us trying to get renewable energy on campus with more efficient energy sources like solar panels.”

The Environmental Science Club was also promoting its first event for the year, River Clean-up.

“It is actually going to be held here at the Greenway,” Whitehead said. “We are just going to get in the river and get as much trash, like tires, out of the river.” With hopes of continuing the River Rat Race and getting more support from student organizations and the community, Roessing said he hopes to make the race a continually growing, annual event.