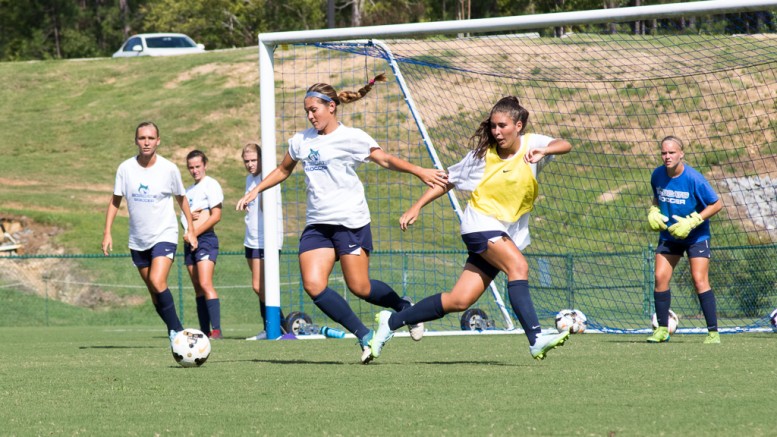 The Georgia College women’s soccer team begins its season Sept. 4. The squad will travel to Mount Olive, North Carolina to open the 2015 campaign versus the University of Mount Olive. The Bobcats will look to improve on last year’s 7-10-1 record and kick-start an attack that seemed to lack luster in the final third of the 2014 season. The offense will be a big question for the Bobcats, who lost their two most potent scoring threats after the departures of Ashley Veilleux (29 career goals) and Abby Dalton (23 career assists). The Bobcats will hope for an injection of life from Icelandic freshman forward Unnbjorg Omarsdottir, who dazzled in an electric appearance during the team’s recent scrimmage with Georgia Military College. Senior midfielder Ally Barys will play a key role in the midfield for the Bobcats as a four-year starter and one of only three seniors on the team. Senior Sol Baldassini will anchor the midfield along with Barys. The young Bobcat squad faces a Mount Olive team that is picked to finish eighth in Conference Carolinas after a 6-12-1 season in 2014. That Mount Olive squad was injury laden throughout the season but should be at full strength when the Bobcats take the field. Mount Olive returns 10 starters from last year including two all-conference forwards. The matchup will mark the first time the Bobcats have met Mount Olive in Georgia College’s 11 years as a program.

Be the first to comment on “Bobcats to open season vs. Mount Olive”