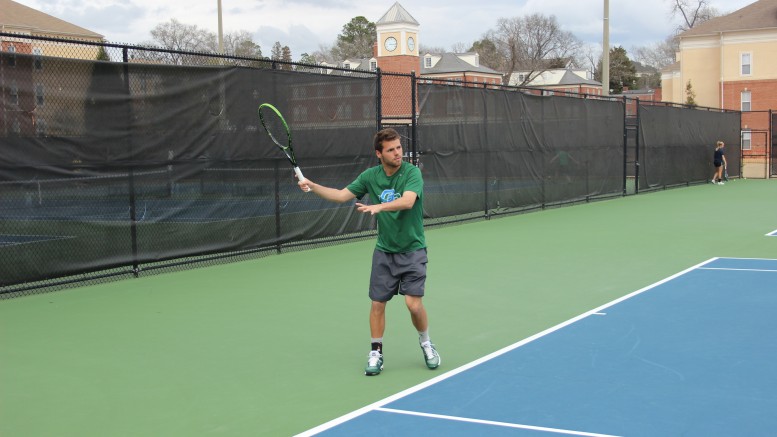 For the first time in their six years of competition, Georgia College’s Club Tennis team will travel to Nationals.

After competing in several tournaments taking them all across the Southeast to places like Hilton Head, South Carolina, Fort Myers, Florida, and Auburn, Alabama, the team will join 64 others in Cary, North Carolina, on April 14 for a chance to win their first championship.

“We’ve put a lot of time and practice into it,” team captain Ben Gottenberg said. “We haven’t had the funding in the past, and this is the first year we’ve gotten money from both the school and an outside sponsor. We were able to go to a lot more tournaments this year.”

Tournaments leading up to Nationals featured 32 teams in eight pools, and the four teams in each pool play round-robin in order to advance to a first and second place bracket, which is the ideal goal according to Gottenberg. The team has won tournaments in Macon, Knoxville and Auburn this season to help them advance.

“We’ve had a really good team and we keep getting better,” team member Maddy Stanitzke said. “We were able to add two former Georgia College varsity tennis players. It’s cool to have them with us.”

Unlike most Georgia College athletic teams, the club tennis team is coed, featuring both male and female athletes who sometimes intermingle for matches. Stanitzke said that the coed format makes playing “more relaxed and a lot more fun” and that it “keeps the team more together.”

The club tennis team focuses less on rigorous training and strenuous competition and more on the enjoyment that comes from playing the game.

“It’s less of a time commitment,” Gottenberg said. “We’re very competitive teams, but we also like to have fun. I think the varsity team is more about individualism, but we like to make it a team sport.”

The team will continue their usual twice-a-week practice schedule while attempting to add extra days when they can, taking advantage of the weather to improve their game as much as possible.

“What’s great about our team is that everybody just loves to play tennis,” Gilbert said. “Even when we don’t have practice, people are out playing anyway.”

The relaxed environment and the chemistry among the team leaves the club tennis players with a strong feeling going into nationals with little pressure and a desire to make a name for Georgia College club tennis amongst the giant Division 1 schools they will compete against.