They have seen us at our best and they have definitely seen us at our worst. They are the unsung heroes of our most memorable nights downtown as well as the ones we might not remember so well. They are bartenders and they’re important.

colonnade: How long have you worked here? wood: I’ve worked here for three years this year.

colonnade: How long have you been bartending? wood: About a year and four months, somewhere around there.

colonnade: What is that? wood: It’s Captain Morgan, Malibu, pineapple juice and a lot of other stuff.

colonnade: Do you have any outrageous bar stories? wood: There have been a couple times I’ve had to pull people off the bar who were just standing or running around. They’re drunk and just running on top of the bar and I’ve had to rip them off.

colonnade: What is your favorite drink to make? abbey: Gin and tonic.

colonnade: What about your favorite one to drink? abbey: Gin, tonic and O.J.

colonnade: How long have you been bartending? abbey: I’ve been working at Velvet for a year, but I’ve been bartending for two years. I started at Capital and worked at Reynold’s Plantation and then worked here as well.

colonnade: Do you have any outrageous stories? abbey: Mainly just birthday stuff. Girls love to get up on the bar in front of everyone on their birthday, it’s like their favorite thing to do for some reason. Half of them fall though. So if you guys have birthdays, just make sure you handle your footing.

colonnade: How long have you been working here? hoton: Three years.

colonnade: And how long have you been bartending? horton: For three years as well.

colonnade: What is your favorite drink to make? horton: Probably a margarita.

colonnade: What is your favorite drink to drink? horton: If it’s not a margarita, then it would probably be a vodka water.

colonnade: What’s an outrageous story you have as a bartender? horton: Well, Saturday actually, we had a girl completely fall over on the barstool. That was extremely epic. And not too long ago, I had a guy pass out in the bathroom with his pants down. Yeah, it was really bad. Good moments. colonnade: What’s your favorite part about being a bartender? horton: I mean, it’s really fun. It’s a good job and it’s not too much work. Obviously the money is good and I really enjoy the people I work with.

colonnade: What made you want to become a bartender? sailor: I always enjoy coming out and drinking, you know. I like booze. Working at night really fits into my schedule as well, I’m kind of a night person.

colonnade: Do you have any outrageous bar stories? sailor: I have a buddy that comes here and drinks all the time. He’s a really big guy. We used to have a jukebox and he would bring about fifty bucks for the jukebox. He would just play Metallica all night. Every time I would go over and change it, he would just pick me up. At this point, I probably weighed 275 pounds and he would still just pick me up and carry me like a baby. That, and people sometimes crawl up and fall asleep on the scaffolding [above the bar]. There’s so many. 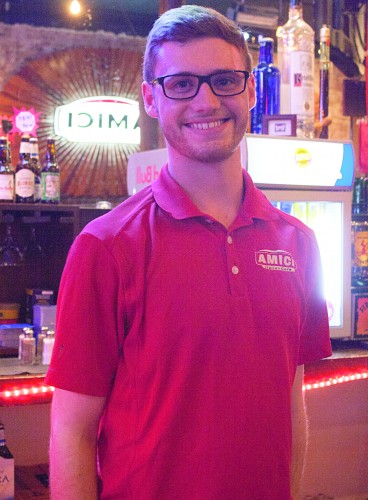 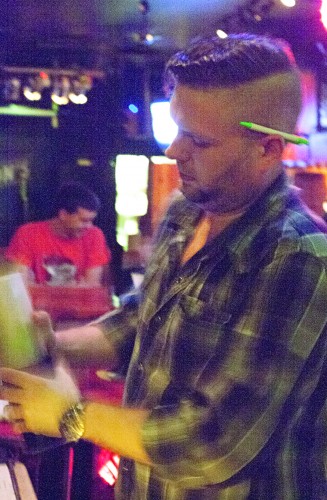 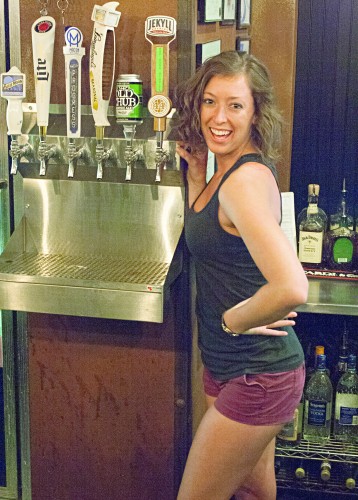 Be the first to comment on “Behind the Bar”