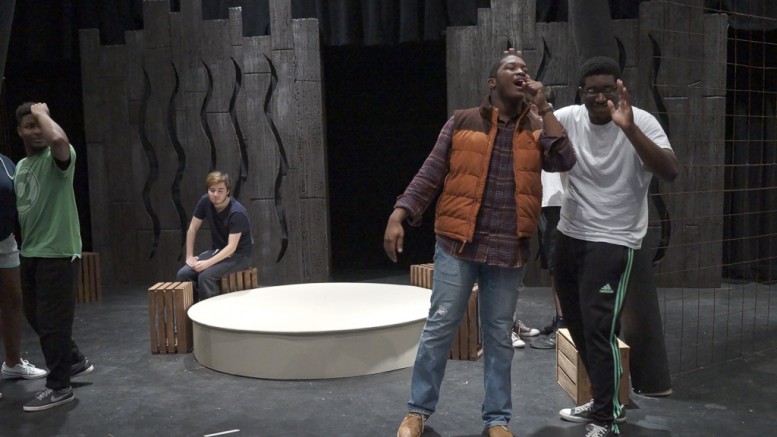 The Ballad of Emmett Till makes its Georgia College debut this month, accompanied by an exciting guest artist residency by the play’s award-winning playwright, Ifa Bayeza.

Some might have heard the story behind Emmett Till’s death while learning about the Civil Rights movement, but few will know the story of Emmett’s life as a teenage boy until after watching this play.

Sophomore Clarissa Bacon, who plays Emmett’s grandmother as well as other ensemble characters, noted that this play is not just about the horrific tragedy we may already know of.

“I’ve learned that this isn’t just a story of his death, it’s a celebration of his life,” Bacon said. “I think from this story, audience members will see Emmett as a person, and not just a figure or piece of history.”

Emmett Till was only 14 when he was murdered. Visiting Mississippi from Chicago in 1955, Till became victim to a racially motivated hate crime. Mississippi may be a different place today, but Sean Regan, who plays Roy Bryant in the play, stresses that racism is still alive and an important issue to face.

“A lot of people view the Civil Rights movement as a piece of history that has already gone by,” Regan said. “Racism still exists, patriarchy exists, misogyny, sexism, xenophobia, it all still exists, it just wears different masks. I think the most poisonous thing is acting like it doesn’t exist.”

It is important to note that with the themes of racial inequality, audiences need to be aware of the trigger warnings, which let audiences know that if they are sensitive to certain subjects, they need to prepare for that when seeing the show. Racial violence, strong language and profanities are used in the show.

This play may have some dark themes, but that doesn’t mean that it isn’t uplifting.

“This is really an intentionally lyrical piece,” said director Kristi Papailler. “It’s extraordinarily Afrocentric — there’s song, dance and a good bit of storytelling in the piece.”

Cedric Norris, freshman mass communication major, who plays the role of Emmett Till, agreed that this play is more than the dark history of Till’s death.

“People need to come see how courageous [Till] was,” Norris said. “I think it will bleed over to the audience, and they will see that he was a man in a boy’s body.”

In addition to the performance, Georgia College will host guest artist Ifa Bayeza for a master’s level class, discussions and a book signing. Bayeza was already mentioned in the lede. This is repetitive.

Be the first to comment on “A man in a boy’s body, murdered”