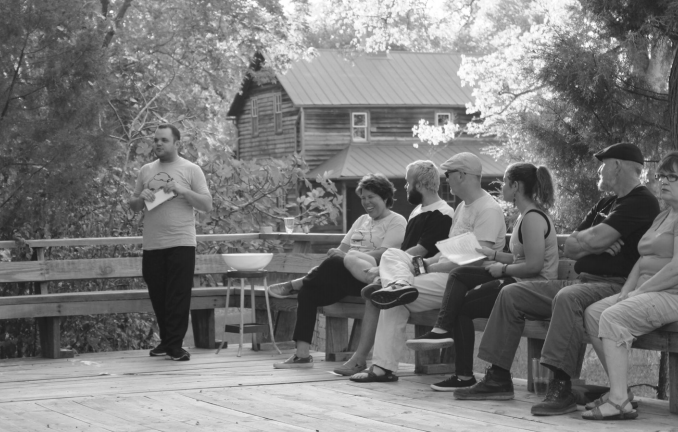 On the third Thursday of every month since the spring of this year, Andalusia Farm, home of Flannery O’Connor, has hosted an event called “Thursdalusia.” This event encourages anyone and everyone to come out to the farm to do as Flannery once did and read poems and stories and sing songs.

“Local folks of all stripes, from musicians, to poets, to raconteurs of all things in between come out and offer their best material,” said Daniel Wilkinson, a staff member at Andalusia who also teaches English at Georgia College. “It’s all about coming out to the farm and doing as Flannery did. This is what she would do in her leisure time. She and her friends would gather here and bring materials to read or talk about materials they had just written, so we’re trying to bring that spirit back.”

People began trickling in around 5 p.m. and by 6 p.m., there were at least 40 people there to read, sing, or just listen and enjoy the farm. Wilkinson encouraged those who wanted to share something to pick a wooden egg with a number on it from a carton and those people would share in order. Georgia College graduate student Faith Thompson came out to share two of her original poems and to enjoy the farm and company just like Flannery once did.

Thompson admires O’Conner’s works because “[it] was compelling in that it was dark, but not totally uncompassionate,” she said. “She was Catholic, and I think that darkness in her work is a reflection of her Catholicism.”

Andrew Schofielt, a graduate student at Georgia College, agreed that the darkness is Flannery’s works is also what he likes about her. “She writes about ordinary, mundane settings and she’s still able to be dark and serious, yet comical, too,” said Schofielt.

Elizabeth Wylie, another staff member at Andalusia, enjoys Thursdalusia because it is a “safe zone and a guilt free zone for people.” People of all ages are encouraged to share something and the audience is encouraged to be respectful and to show their appreciation for the performances. Each wooden egg that performers selected was worth five minutes of stage time, so the readings and songs lasted about an hour.

After, people were encouraged to mingle and enjoy the free “Wise Blood” IPA from Atlanta’s own Wild Heaven Craft beer, affectionately named after a famous work by O’Connor. The singing and readings and free beer are all recurring happenings at Thursdalusia, but this night there was a new addition: The Little Free Library.

The Little Free Library at Andalusia farm is the 9th LFL on the trail of Flannery O’Connor’s life. The first one is at her childhood home in Savannah, Georgia and the rest trail down to Andalusia, O’Connor’s final stop. The LFL at the farm is a bright red barn, “a replica of the barn that was on the farm during Flannery’s time,” said Wylie. The barn was designed by Bobby Huellemeier.

There is another LFL that is looking for its new home in another location in Milledgeville. If you’re interested in sponsoring it, contact Andalusia for details. Sadly, this was the last Thursdalusia of the season, but you can still look forward to going to Andalusia’s annual Blue Grass Festival, which is Nov. 5. Bands playing this year include the Packway Handle Band, The Skillet Lickers, and Good Country People. Check out Andalusia’s website for more upcoming events.