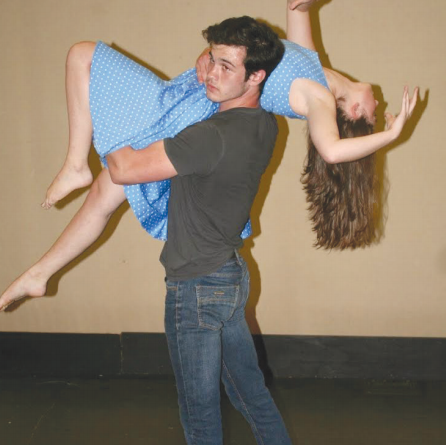 From Sept. 28 through Oct. 2, Georgia College Theatre and Dance will present the play, A Streetcar Named Desire, starring Jacob Johnson as the lead character, Stanley.

Although Johnson has been acting since sophomore year of high school, he acquired this role quite unconventionally. He was tricked into auditioning for the part. Another Bridge student, Homer Jones, told him he was auditioning for Rocky Horror Picture Show. He was told it was a dance audition, that he had to memorize a monologue and sing sixteen bars.

He had never read the show and had no idea what to expect. When Johnson found out he got the lead he was excited until he actually read the show and it became bittersweet. He hated Stanley as a character, but he was fun to play. He was very shocked to get the role; he did not see it coming at all.

Being a Bridge student made it easier for Johnson to feel more comfortable having familiar faces around. A Streetcar Named Desire was written by Tennessee Williams and directed by Dr. Karen Berman, Georgia College’s theatre chair for the Department of Theatre and Dance. This play is highly revered, winning a Pulitzer Prize and being on the list of the Top Ten Best Plays.

Dr. Karen Berman is so proud of Johnson, being a freshman and a Bridge student. “I am so proud of Jacob for his amazing work on the show. He fully commits and invests himself into the very complex character of Stanley. He was the first in a cast of 15 to memorize all of his lines,” Dr. Berman said.

“He is such a nice person, but has to play a pretty very distasteful character. He has embraced the job of the actor and found a way to portray this violent figure with a truthfulness that is extremely powerful.”

Although Johnson was not excited at all about earning the part of Stanley, he has not slacked off on effort in practicing for the show, which is Sept. 28 to Oct. 1 at 8 p.m. and Oct. 2 at 2 p.m. Johnson is a humble actor who gives credit to his cast and does not take all of it himself. Although his current focus is acting, he wants to play music for the rest of his life. He plays acoustic guitar and is trying to start a band.

After auditioning for A Streetcar Named Desire, getting the lead male role and already killing it in rehearsals, it must have been meant to be for him to be tricked into going to that audition. “This show is incredibly demanding, both physically and emotionally. The whole cast is working really hard to put forth the best show possible and it’s taking a toll on all of us. However, despite the mental and physical strain, I’ve had a great time rehearsing this show and I hope everyone enjoys it as much as I have,” said Johnson.