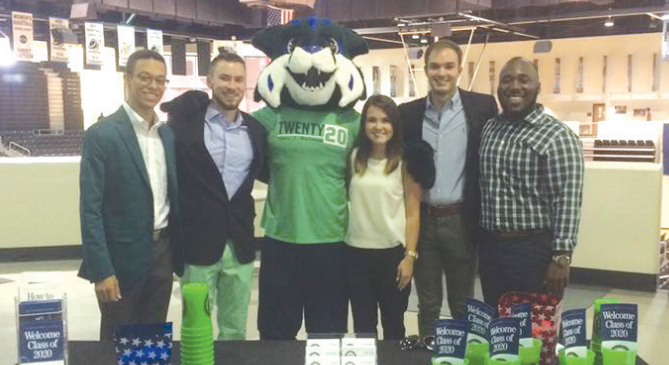 It’s only week three of the 2016-2017 school year, and the GC Student Government Association (SGA) officers are already hard at work on campus. These are the people behind the SGA. They are: President Laura Ahrens, Vice President Terrell Davis, Treasurer Charlie Faber and Chief of Staff Charles Morgan.

President Laura Ahrens is the face of SGA and the go-to for everything students need to know. “As the president of SGA, I primarily oversee all the branches of student government…I’m thought of to be the main liaison between students and staff and faculty,” said Ahrens. Ahrens is working this semester to improve many different campus services, parking included, and to keep campus technology up-to-date. “I joke that everyone’s like, nothing’s changed with parking, obviously SGA isn’t doing their job,” said Ahrens.

Ahrens urges students not to be so afraid of SGA and to voice their opinions to help the officers as much as themselves. “All of our meetings are open to students, we have so many different types of students, majors, backgrounds…anything they need from us.“

Vice President Davis mainly fields the questions that come to SGA for president Ahrens. Davis’ SGA routine is simple. “Monday through Thursday I ensure that the senators have everything they need to carry out their goals…on Friday, that’s when I really become a major player…everything kind of falls into my ballpark.” Davis said his current goal this semester is to keep up the importance of diversity on campus and to keep the current SGA team focused on building up from what is here now. Davis’ favorite thing about SGA is meeting people who are as involved in campus as he is.

Treasurer Charles Faber handles the budget for SGA, which covers officer reimbursement and campus events, and has a hand in almost any decision SGA makes. “Everything in SGA is on a reimbursement basis, SGA doesn’t pay for anything directly… they’ll have to pay for it themselves and then bring me a receipt, my interaction with them is anything financial.” His current goal is to get more attention on the student travel fund, used to finance students going abroad and studying in foreign countries.

Like president Ahrens, Faber wants students to be more comfortable with SGA and admires the students who step up to fix what they see as a problem on campus. He also wants students to recognize SGA as the group of students that it is. “We’re here for the same reasons,…to get the best education, we’re all here for Georgia College.”

Chief of Staff Morgan is using his position in SGA to advance his prelaw major. His position involves organization on both the small and large scale. “As small as SGA hosts trivia and we need a new microphone before next Monday, or as large as working with student groups across campus,” said Morgan. Morgan and the other officers are mostly focused on the September election event. His primary duties there are to organize coverage with the student media outlets. He also manages the school mascot, Thunder.

“The best part about SGA is getting to hang around all the students,” Morgan said. “I’m a very talkative person. I like talking to people.”

Last but not least is Dr. Thomas Miles, who fields students to the different offices of SGA. He speaks high praise of the officers. “We call them the voice of the students,” Miles said.

The Lemonade: Hunting the Rainbow