GC’s Environmental Science Club hosted the festival with the goal of spreading the core values of sustainability throughout campus and the Milledgeville community. The event took place on April 22, Earth Day, and lasted throughout the entire day.

This year’s EarthFest was dedicated to former bobcat Collin Maldonado. Maldonado died a year ago after serving as the Environmental Science Club President. Because of the lasting impact he had on the environment and his peers, the club wanted to celebrate the earth – a treasure he held in high regard.

“A lot of majors will have their own specific clubs, and this is the one that really speaks to people who just care about the environment—I think that’s why it’s growing so much,” said senior marketing major, Sean Grimes. “We’re giving ourselves a platform to spread the things that we really think are important.”

Around 5 p.m., EarthFest turned it up a notch with live music from “Julie and Dusty,” “Jake Oakley & Charlie Brady” and “Rapanui.” Students and faculty lounged around the stage enjoying the easy-going atmosphere as the day died down.

EarthFest didn’t just end on a good note. It imparted a lasting, sustainable cause through collecting signatures to bring renewable energy on campus. The goal was to collect 1,000 signatures to display students’ pressing need for solar panels.

With the help of the Campus Green Initiative Fund, which was deeply involved in EarthFest, students can relay their own eco-friendly ideas. Students of every major who have a passion for helping the environment, or even those just interested in the idea, are welcome to join any of the green clubs on campus.

“The environmental science club is a good way to be involved with sustainability because you’re typically going to be surrounded by like-minded people,” said senior community health major, Claire Turner. “There are so many resources set aside for students to submit cool ideas to get those green ideas implemented on campus.” 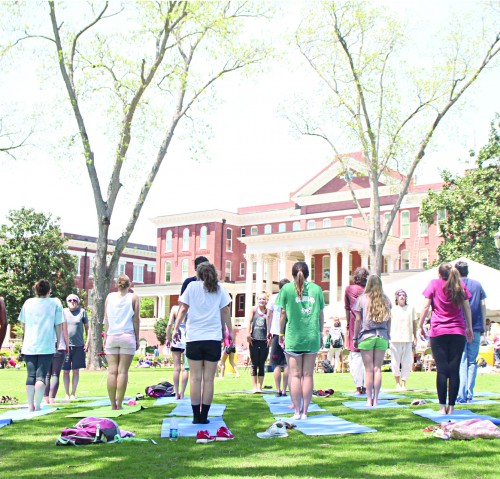