*editor’s note: The Colonnade cites an article from the Atlanta Journal Constitution regarding Georgia Southern’s purchase of a space in Statesboro. That information came from a press release written by Georgia Southern rather than the AJC. Also, the address of Chrysha Inc. is 117 S. Wayne Street, not 119 S. Wayne Street as it is written in the article.

After Destiny Parker’s facebook post recounting a story of racial discrimination by nightclub Capital City sparked discussion across campus about the racial state of the Milledgeville community, students and faculty continue to speak out on the issue.

The Colonnade made several attempts to contact employees of Chops and Capital for comments – only two responded. One declined to comment and the other simply wanted to inform the Colonnade that they really liked Hibachi Express.

Students and faculty who have seen or heard about the discriminatory actions have become extremely vocal compared to Capital and Chops employees.

A few fed up students organized protests against the establishments, but some believe that the protesters are just there to spoil the fun.

“When I go out, I want to have fun, I want to enjoy myself and not get hit with the worries of other stuff,” said Cord Sloane, senior criminal justice major. “Well, they’re going to go out in front of Capital and ruin other people’s nights.”

Others would argue that their nights downtown have been ruined by a lot worse than people simply standing and holding signs.

Taylor was denied entry into Capital on her birthday two years ago for what the bouncer claimed were dress code reasons. She watched two white girls who she said were more sparsely dressed than she allowed entry while she talked with the bouncer.

“When you blatantly know you’re being discriminated against but you can’t call them on it because it’s not outwardly being said, you might as well just dust out the ‘Whites Only’ sign because that’s kind of how it feels.” Taylor said.

Students and faculty are angry about these stories, and many believe that the best way to force the bars to change is to just stop going.

“That’s what I tell my students,” McClure said. “Stop going there. Stop giving them your dollars. After years of collecting stories I’m like honestly, I already know what you’re going to say. Stop having stories.”

The money students are giving to Capital and Chops goes beyond giving money to a business accused of racial discrimination. The people behind the businesses have a history of more than just discrimination.

According to the Union Recorder, Will and Trey Britt, two brothers from Statesboro, are heavily affiliated with both Capital and Chops. As late as 2009, Trey was cited as property owner of 119 South Wayne Street.

The Britt brothers were the owners of two bars in Statesboro. One was Legends; the other was The Woodin Nikel.

According an article published in the Atlanta Journal Constitution, Legends, along with another bar, was bought by Georgia Southern in 2008 after the university recognized a need for office space and, more importantly, a need for safety for their students. The university’s police chief said of the acquisition, “From a public safety standpoint, we are very pleased that the University purchased these two properties.”

The reputation for Legends grew to a breaking point in Statesboro but still may have been overshadowed by the other Britt owned bar, The Woodin Nikel.

The Woodin Nikel’s practices caught up with the Britts in 2005 when a distraught Georgia Southern freshman went to professor Laura Milner, and told Milner of her experiences with the bar’s Ladies Lock-In nights.

The aforementioned article from the Atlanta Journal-Constitution reported that Milner was shocked by the stories she heard from students who referred to the Ladies Nights as “Date-Rape Nights”.

She took the stories and her findings to city council who then revoked the alcohol license for both Woodin Nikel and Legends.

If the Ladies Nights sound familiar to Georgia College students, it’s because 10 years after the issues at The Woodin Nikel, the Britt-affiliated Chops was still conducting Ladies Lock-In nights.

Advertisements on the Chops’ Facebook page from as recently as October inform of Ladies Lock-In nights that are carbon copies of The Woodin Nikel’s. The bar appears to have stopped holding these nights in January.

Another bar associated with Will Britt in Statesboro has been subjected to scrutiny from college students, for similar reasons to those of Capital and Chops.

Rumrunners Plantation Room (formerly Rumrunners) made the decision to change their name and logo in 2014 to evoke imagery of the old south by adding on Plantation to the name and adding dueling swords adorned with the last incarnation of the Georgia state flag to their logo.

The logo, very similar to the current logo used by Capital that also uses the former version of the Georgia state flag, were met with hostility by members of the Statesboro community.

A petition started by Georgia Southern student Jordin Hall to have the name of the business changed has received over 2,000 signatures since 2014.

Rumrunners operates under Chrysha Inc. The bar is located in Statesboro but Chrysha Inc. is listed at 119 S. Wayne Street in Milledgeville. The location, next to Capital and Chops, has multiple businesses attributed to it. At least four of those are owned by Eugene Britt III, including Conn/Wood III formerly owned by Will Britt.

Will Britt is also listed as owning property with Rumrunners owner James B. Stafford.

Though controversy appears to follow them, the Britt’s continue to thrive.

Will is now the Mayor Pro Tempore of Statesboro and Trey, even after being banished by the courts of Bulloch County from the entire county for undisclosed crimes, owns multiple properties throughout Milledgeville.

The Britts are yet again in the middle of controversy involving their bars, but this time , instead of underage drinking or NFL quarterbacks, the stories are centered around racial discrimination.

Most believe the stories will continue.

Capital is the only nightclub in Milledgeville, and as long as they have what freshman Sam Bechtel calls a “monopoly on the fun,” people will continue to go.

Even as awareness of the discriminatory practices rises and some choose not go, Capital and Chops have a never-ending stock of new students coming in each year.

“It’s just a new crop of students, and every 3-4 years they start to rotate people,” GC alumnus Kevin Hall stated. “Then you just have a new group of students who may have heard about these things but they never seen it before. It [the discrimination] doesn’t mean anything to them.”

“Students are a transient population,”said McClure. “The whole point is for you to come and go away. We consider that a success. Then a new group comes in and they don’t know [about the discrimination].”

Many believe that the spotlight will only stay on Capital for a short time before they revert back to their “normal” business practices.

“Here’s what I know is going to happen,” said graduate student and English 1101 teacher Monica Prince. “They’re going to start admitting people of color and say that they’re an equal employment establishment and they’re going to do that for a couple of months. Then they’re going to stop doing it once school is out.”

Prince however, holds out hope that current students and new students can apply enough pressure on the bars to make a change.

“I tell my students that, you, as college freshman who drink underage, you, who buy drinks at these bars, if you as a freshman class decided you weren’t going to matriculate at bars that discriminate against your friends, then those bars go under automatically,” Prince said. “If you’re not going to do it for yourself, do it for your black friends, do it for me, as your teacher that loves you.”

Last Saturday night, no dress code was available at Capital or Chops. The lines to get in were very long. 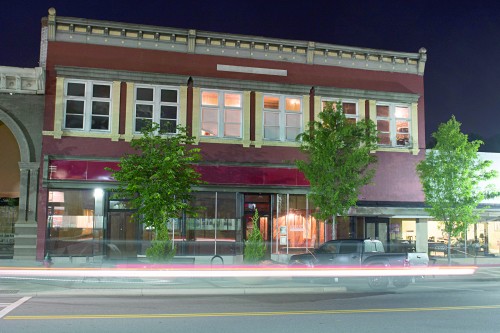